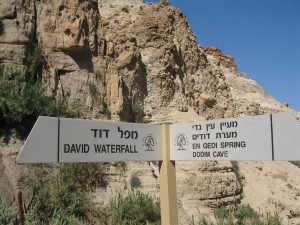 The Dead Sea represents contrast to me. Some of the most rugged country ever surrounds this body of water whose colors shift like a tourmaline crystal. To the north stands a manicured date-palm grove, its trees rigidly resembling bristles of a toothbrush. On the west, Ein Gedi, a wadi (canyon) that shielded future-king David from King Saul creates a thin, green slash. (Check the Old Testament book of 1 Samuel for the story.)

Aside from the David/Saul angle, the Dead Sea is probably most famous for Qumran, where a shepherd looking for a lost sheep tossed a stone into a 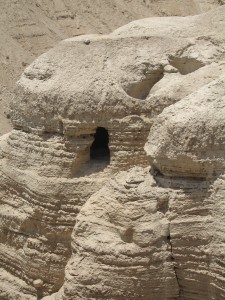 cave. Stone hit pottery in a clink heard round the world, and the discovery of a trove of two-thousand-year-old parchment, papyrus, and bronze documents — the Dead Sea Scrolls — yielded the oldest known version of every book of the Hebrew Bible. Mystery surrounded the unfurling and translations of the scrolls, and the documents are still surprising schoalrs. They’re arguably the single greatest Biblical, and archaeological, discovery of my lifetime.

In my memories, though, I return to Ein Gedi. It’s smack dab in the middle of nowhere — and a dry, sterile, forbidding nowhere. But as I ascended the pebbly dirt track, jumping (or in my case, flailing) from stone to stone, crossing the stream that ends up in the Dead Sea, I realized I was walking an aisle in God’s supermarket. 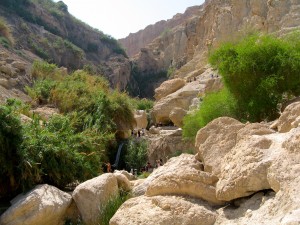 The stream contains drinkable water from four springs: Nahals David and Arugot, and Shulamit and Ein Gedi. Olive, fig, and almond trees dangle from wadi cliffs. Fennel plants and rosemary bushes spring from cracks and sprout from behind boulders. Ibex and a variety of birds accompany the hiker, the latter providing a cheery soundtrack. A man could hide here indefinitely, I remember thinking, and not starve to death, although the surrounding countryside is deadly.

We’re staying on this visit at one of the swanky resorts on the shores of the Dead Sea, where people get 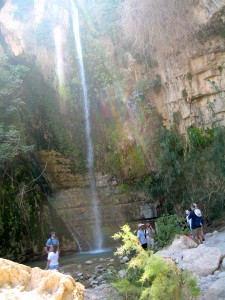 mud wraps, float in salty water, and relax. I’m going everywhere, though, instead of treating the time as a vacation: the Monastery of the Temptation,Wadi Qilt, and Jericho (in the West Bank); Masada; Scythopolis.

And of course, I’ll hop and flail to David Falls, a sixty-foot waterfall in a cool, shady bowl that’s welcome relief after a dusty, hot hike up the Ein Gedi trail. Along the way, I’ll watch for the resources God tucked into this place to sustain an ancestor of Jesus Christ. And I’ll remind myself of a verse I claimed as a young women, paraphrased from the book of Luke: “from those to whom much is given, much is expected.”