I’ve just begun sharing photos on Facebook of settings from The Brothers’ Keepers (click here for the book on Amazon), and think bits and pieces of the posts would be interesting blog topics. Since I write international suspense, these photos are from spots around the globe. Since I write with a Christian worldview, the locations also have significance to my faith. 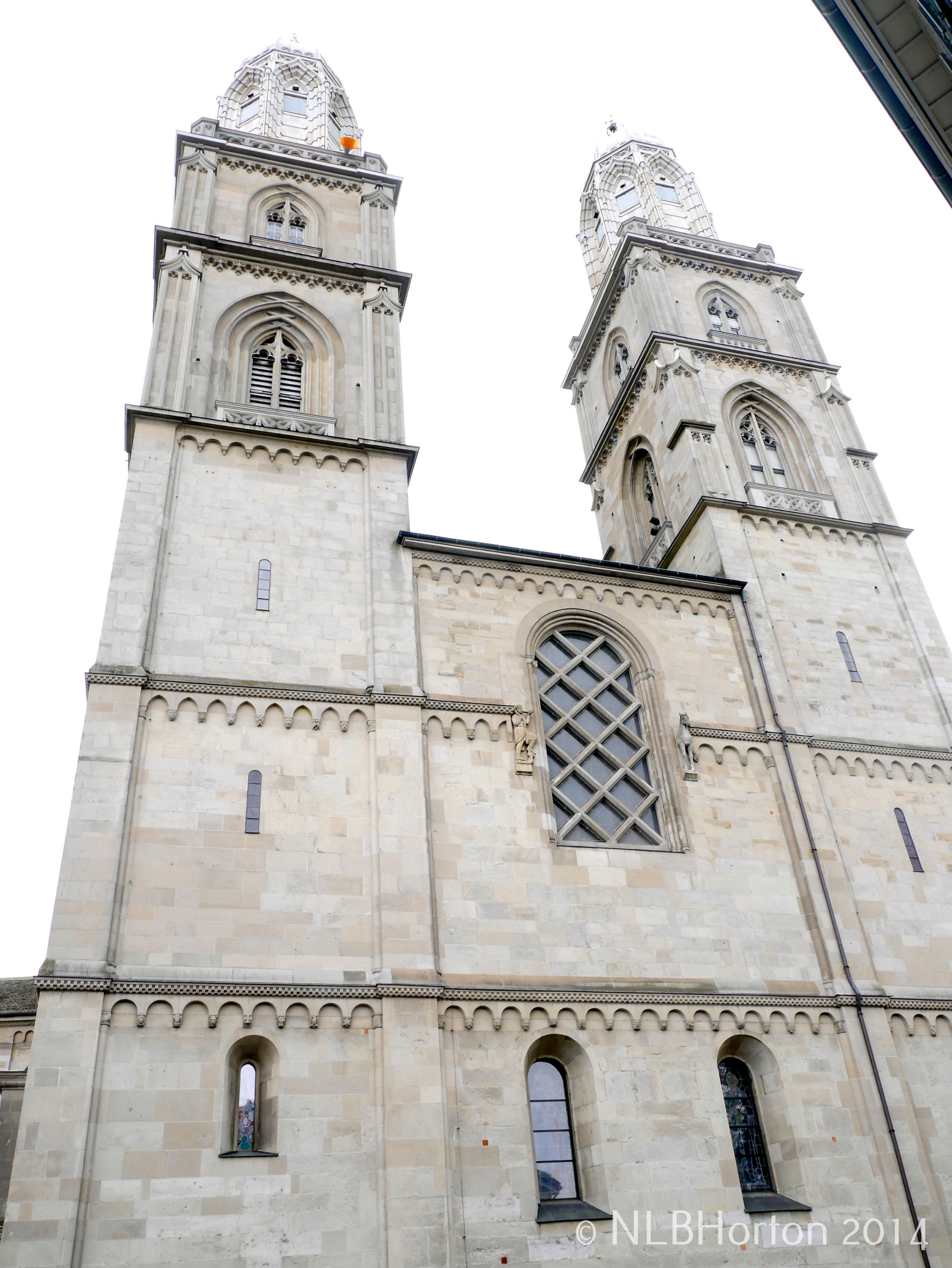 This week, the photos (click here for a link to my Facebook page) are from Switzerland, an important center of learning that contributed a good bit to the Protestant Reformation. (Calvin, generally viewed as founder of the Presbyterian denomination, and Zwingli, another prominent Reformist, were Swiss.) As we approach the Christmas season in the midst of the release of this new book, I’m re-evaluating the Reformation as it relates to Christmas and seeing parallels I’ve never noticed before.

For instance, scholars recognize that the expansion of Christianity relied on the excellent Roman road system. Think about it: the Apostle Paul’s missionary journeys were, in no small part, possible because of the roads and trade routes established and well maintained by the Romans. (It’s interesting to note that before Paul’s time, the Romans and Greeks were locked in wars that determined world domination. Had the Greeks won, those roads and trade routes would have looked very different.)

In a similar manner, the Reformation helped spread the news of Christianity. The 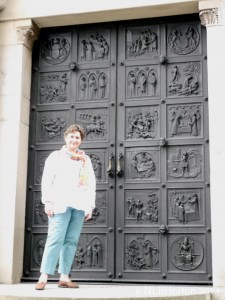 Reformation occurred right after Gutenburg’s invention of the printing press. Combine the printing press with the emancipation of the Bible from academic Greek, Hebrew, and Latin, and scripture was “freed” by being translated and distributed in languages everyone could understand.

The news of Christ becomes more important during the Christmas season and reaches its climax at Easter, when His sacrifice became the bridge between a perfect God and all of humankind. The Reformation was a critical development in bringing the faith to the people for whom it is intended. It was a sieve through which understanding could be shared by individuals, without an entity (a church) standing between the person and his or her God.

Our faith is an individual faith, and we are united in community. I pray that we embrace it and each other as we approach Christmas.

(The top photo is of the Grossmunster in Zurich, Zwingli’s church. The second is of me in front of Otto Munsch’s monumental bronze doors of that church, which depict scenes from the Reformation.) 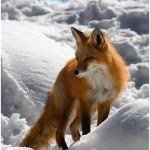 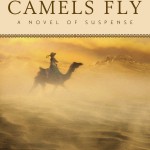 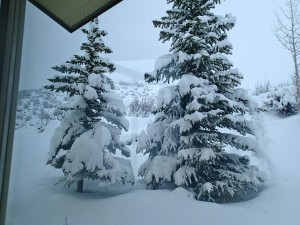 We’re being hammered by an early winter storm. The sky is clotted with fat flakes belonging on a vintage Christmas card, periodically overtaken by thick swirls that resemble splatting cake batter. Jagged white gashes highlight contours of piney evergreen branches. Except for the random snow plow, my world is still. And, more importantly, quite.

I thought “snow silence” was a mountain thing, but discovered last month that noise evaporates in a snowstorm — even at sea level!

I was in Venice, Italy, photographing and confirming facts pending the release of The Brothers’ Keepers (http://amzn.to/1yFZgzp) November 17. My hotel on the Grand Canal was next to the Aman Resort where George Clooney married a couple of days later. He was scheduled to arrive mid-way through my five-night stay and water taxis were already scarce. As our concierge said, “Clooney has a place in Como. Why not just get married there?” At least the paparazzi were excited about the wedding of the  year in the floating city. 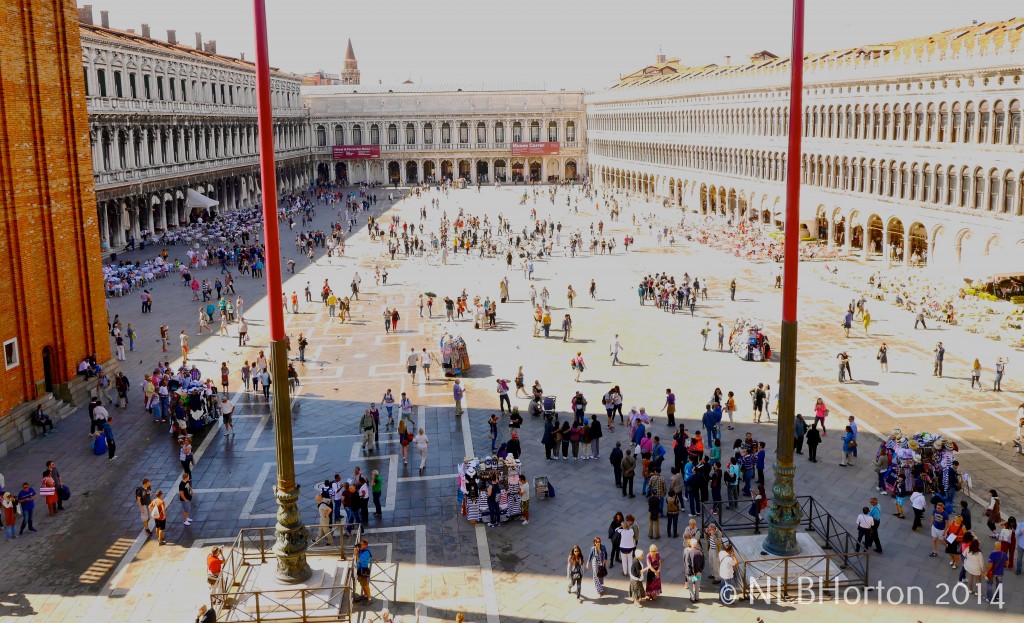 I went for a coffee and to people watch in St. Mark’s Square after a late lunch. The hour hammered from the bell tower as a line of clouds headed my direction. I spent the afternoon taking notes for things like this blog, then cut back through St. Mark’s around 6:00 p.m. — and was almost knocked over by a strong wind heralding the front line of the storm I spotted earlier.

I cut left near the famous jeweler, Nardis. Zigzagged for three blocks dodging early evening strollers, trip wires disguised as dogs and owners, and hawkers selling counterfeit handbags. Crossed two small squares and paused to consider a silk scarf in a boutique at the bottom of a bridge. I arrived at the hotel content to spend my evening reading and responding to emails. 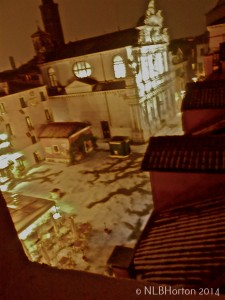 Then it hit. I thought it was heavy rain. Peeping out the window, I discovered an inch of ice pellets covering everything. The torrent shifted between sleet and snow for forty-five minutes as Venice edged to a standstill.

In the lobby, men in morning suits (tuxedos and tails) lifted heavy antique furniture out of harm’s way, and rolled up rungs already soaked by two inches of water cascading through the double doors. More water poured down an elevator shaft.

Venice was turning to slush — but it was quiet, enveloped by a blanket of the same quiet I experience now on top of my mountain. I peeked toward the Grand Canal sixty feet away, and then toward the small square.

One set of footprints headed into the silent Venetian night, doubtlessly from a gondolier heading home. 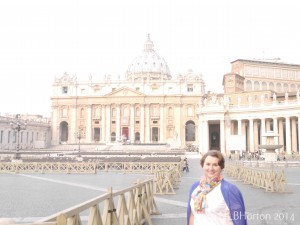 Two weeks, three-hundred-and-twenty steps, and one case of heat exhaustion ago, I stood on the catwalk atop the dome of St. Peter’s Basilica in Vatican City. Rome sprawled, blanketing the seven hills of the Eternal City. Pope Francis was in residence, and St. Peter’s Square was cordoned off ahead of his Wednesday audience with the faithful.

Today, I sit atop one of the Rocky Mountains. Sagebrush and serviceberry erupt through the aspen leaves that blanket the three peaks enhancing my office view. I am in residence, and the back meadow was wide open for the three doe and one magnificent buck that visited during breakfast.

Both spaces are formidable.

Mosaics decorating the interior of St. Peter’s are so fine that they appear to be 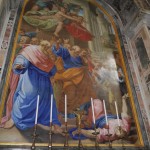 paintings. Michelangelo’s Pieta, the statue of Mary holding a crucified Christ, is world-class art just inside the enormous bronze central doors. The high-karat gold gilding so many surfaces in St. Peter’s is a drop in the bucket compared to the Vatican hoard purchased in the 1930s.

The public spaces of Vatican City are sensory overload on an epic scale. Which is why, sitting at my desk, typing this post, I find myself humming the old Quaker hymn, “The Gift to be Simple.” 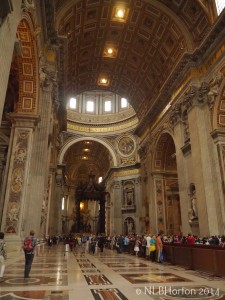 Visiting the Vatican was a privilege — even more of one because I was able to skip the lines and visit very early, before thousands of tourists invaded the one-hundred-ten-acre sovereign territory. But even though I’m a Christian, it wasn’t a holy place to me. I felt no pull to worship there.

Instead, I worship here, surrounded by God’s handiwork, His general revelation of Himself. In the simplicity of my surroundings, I see Him.

Where do you see God? I think it’s a great question to ponder, and the answer might just reflect our self-image more than our theology.

And when we find ourselves in the place just right, twill be in the valley of love and delight.

When true simplicity is gained, to bow and to bend we shan’t be ashamed.

To turn, turn will be our delight, ’til by turning, turning we come ’round right.