(The second post about characters—the WHO—in a five-week, five-subject series.)

Actors call it being “in character.” As an author, each of your characters must remain true to his or her personality, or psychological profile. To write about them believably, you must dig into their psyches before crafting dialogue, or depicting how they react in scenes. By investing the time to become intimately familiar with their temperaments, you’ll write believable chapters that keep your readers turning pages all the way to the last.

Let’s start with an example. My protagonist is a middle-aged female archaeologist. 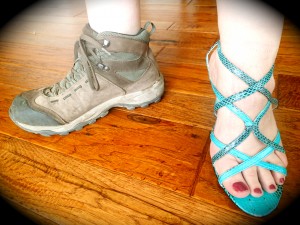 Practical and calm, she wears dusty hiking boots and a frayed safari vest instead of stilettos and silks. Regardless of what she faces, she perseveres. She’s competent, without a mean bone in her body, fiercely protective of family and those she loves. So which shoe fits? Right. (And I know her well enough to know the toenails in that boot are neat, but unpainted.)

My mentor developed her own character questionnaire after more than fifty books. I’m developing mine now, using hers as a template. Famous French author Marcel Proust (1871-1922) is said to have used the following questionnaire to get to know his characters.

Develop a questionnaire, or use one from the internet (http://bit.ly/kMpN7 is an example). But don’t try to make a silk purse out of a sow’s ear, to use an old American cliche, and leave the stilettos to characters young enough to walk in them. [subscribe2]

(This is the first of a five-part series anchored in Journalism 101, where I learned two important things. The first was “every word must earn its right to be on a page,” and this rule applies to literary as well. The second was that each story had to contain who, what, when, where, and why. I’ll look at these elements more closely in the next five weeks—two posts per item—staring with “who.”)

Every story contains multiple “whos.” Your hero or heroine (protagonist). Your bad character (villain). Support staff (in my case, the heroine’s family). Irritants (antagonists). Each one needs to be expanded enough to be believable and relevant to their function in the story, but not so much they impede your tale’s momentum.

Your characters’ names are as important as your manuscript’s. Names either support a

role and personality, or contradict it in some way. Brilliant Daniel Silva calls his hero Gabriel Allon, an obvious link to the Biblical archangel, cementing Allon’s personae. Ian Fleming named his protagonist James Bond: two strong, sturdy, steady names that allow the character to be shaken, but never stirred. In David Baldacci’s The Forgotten, Lampert is a sophisticated man whose sophisticated empire is anchored in evil.

If your imagination isn’t enough, websites can generate names based on characteristics. Although I haven’t used it (because my characters tend to spring fully formed and named), I think this is one of the best: http://bit.ly/KMvis 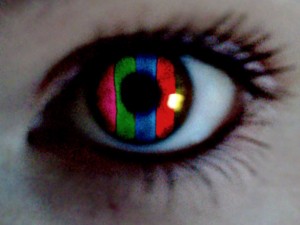 Again, the biggest risk with these necessary elements is overuse. I try to limit myself to one at a time, so will write “gray hair striated like Israel’s wadis” instead of “kinky gray hair, wadi-like, above green eyes.” Both the hair and eyes are important, but if my heroine is watching something, the eyes are MORE important in that passage. If I’m contrasting her with younger people, that’s the time to introduce information about her “mature” hair.

Too much physical information slows my reader down, whereas too little prevents my reader from engaging with the character. I strongly believe a reader generally wants to picture a character—and NEEDS to do so—before they can form a voyeuristic relationship that keeps him or her turning pages. But this information needs to be shared early in the manuscript, and sprinkled strategically. If I’m uncertain what a minor character should look like, I google photographs after citing the character’s tangibles: where he or she is from, rough age, education. You’ll be amazed what you can find under the “images” tab on Google.

Tuesday’s blog will cover temperament, and believability. Until then, do you have trouble naming your characters? Or how do you do it? I am interested.

I live on a mountaintop. A place where the ocassional fox yip, predictable roaring wind, and vigorous birdsong half of the year fade into a natural soundtrack I now regard as near-silence.

Three days ago, I became aware I worked to the music of quiet bleating. Looking up, then walking onto the deck abutting my office, I faced several thousand ewes and lambs performing a sheep symphony. They swirled like a creamy amoeba grazing the mountainside to the west.

A sliver of sheep near the ridge

Because my 33,000-plus followers are from twenty-six countries around the globe, I sometimes post location-specific photos (like the one above) that share America’s glorious West. These “life windows” build a sense of community among Christian and Muslim, Jordanian and Jew, Filipino and Philistine. They’re a way to connect with followers I hope will become readers, and are an important part of my author-reader forum.

And did these sheep connect! I heard from Arabs and Jews. A man from Abu Dhabi, one from Peru, two from Lebanon. A Palestinian and an Argentinian. I became more real via the herd whose South American shepherds return every year to help a down-valley familiy with livestock in numbers exceeding their ranch hands’ capability, and that blanket public lands while keeping fire-prone vegetation under control.

I was delighted at the responses, 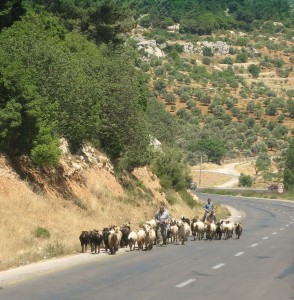 of course, and amazed at the unifying power of a herd of bleating sheep. Then I remembered a photo I took in 2007, representing my own migration fixation on a road on the Jordanian side of the Allenby Bridge.

I hope and pray on my literary journey I find more serendipitious connections with those who join me. And I’ll look for common themes in my public platform, ways to promote shared elements of the human condition.

How do you connect with your readers or followers? I’m interested. 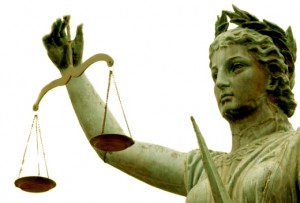 According to the Free Online Dictionary, balance is “a harmonious or satisfying arrangement or proportion of parts or elements, as in a design.” Ideally, each of us lives a balanced life of family, faith, career, friends—you get the picture. But in reality…

Do you find it hard to achieve balance when working on a manuscript? I do. So to continue Tuesday’s theme of finding mental white space (http://bit.ly/16Gq9UT), I offer these tips to balance your life’s scale while remaining productive.

Keep to a schedule. I am one of those who, when inspiration strikes at 2 a.m. (and drips from the pad on the bedside table), trods to the office to jot notes. An hour later, I’m still jotting. And the next morning, regardless of how many pots of Earl Grey I consume, I’m useless. So I now set aside at least four days a week (depending on my husband’s schedule—a cricital part of this balance idea) to write during business hours. This disciplined approach creates a professional mindset that permeates my writing process; enables me to stay on schedule; and removes guilt from socializing, going to dinner, and sleeping through the dreaded 2:00 a.m. creativity bubbles.

Write at your desk. If you don’t have a desk, set up a table. Dedicate a space to this writing endeavor so your materials are close at hand, and you physically seperate yourself from other tasks. If your spot is in a room like an office, close the door. (I went through grad school with one child in high school, and the other doing undergrad. If the office door was closed, they didn’t disturb me unless the house was about to burn to the ground.) By taking your writing seriously enough to create a literary stronghold, you encourage others to do the same, and to respect your time and space.

Writing is about life. I don’t know about you, but I don’t live too much while tethered to my desk sequestered in my office. (I do have the ocassional epiphany there.) Getting out and living life is exposing myself to potential storylines. Observing people is fodder for characters. Participating in the human condition helps me write believably in ways to inspire, encourage, or motivate.

Remember, Hemingway knew the overwhelming pull of a marlin on his line. F. Scott Fitzgerald 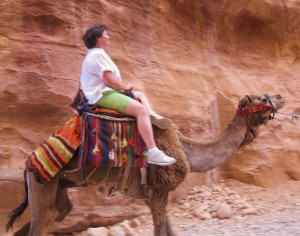 watched Zelda dance in the fountain in front of the Plaza while sipping bootleg gin. James Joyce…well, never mind about Joyce. I’ve ridden camels across deserts and up wadis, and poked around archaeological digs during machine-gun and heavy-artillery fire. Life in a vacuum doesn’t make for good copy, but living it can.

How do you achieve balance in your life, or what problems prevent you from finding it? I’m interested.

I read a blog last week about the differences between today’s printed books, and those of yesteryear. One of the biggest changes was that contemporary readers expect more white space, whereas our ancestors were comfortable with word atop paragraph running into page becoming chapter. 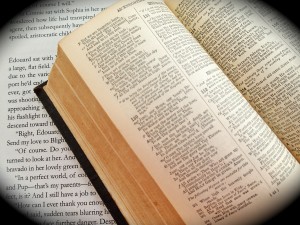 The blog continued by examining the need for mental white space, making me contemplate how I cleared my mind when I’ve been writing too long. Extended periods at the keyboard tend to embed me so thoroughly and deeply in my story and characters that I lose a reader’s more distant perspective. The resulting, somewhat myopic copy becomes too dense, or assumes  readers know more than they do about what’s going on. So how do I avoid this self-defeating (and unprofessional) problem?

Take a hike. I do something physical. Walk to the top of my hill (no small feat in the Rocky Mountains). Endure 15-minute bursts on the treadmill. Anything that makes my blood pump is good for writing, and the monotonous movement of a treadmill triggers clear, crisp dialogue and plotting. If I’ve really hit a snag during winter, I’ll cross-country ski. (I’m afraid I’m that batty old woman thrusting along, muttering to herself, trying not to slide into the frozen creek…)

Read a chapter by a favorite author. Nothing reminds me more of what really good writing looks like than works by my favorite authors. I usually have a couple of their books on the end of the desk, reminding me to be my best. A chapter or two pulls my mind far from my story so I return refreshed and energized.

Brew a cup of tea (or coffee). I know this is ridiculous, but there’s something refreshing about the process. Add a cookie (do I even need a reason?), and I’ve invested ten minutes in a caffeinated change of scenery.

Know when to take a day off. I hate this solution, but sometimes I need to step away from my story. Way away from it. I work ahead, and am maniacally disciplined, so almost always have buffers in my schedule. But when I’m bogged down, or the story is murky, I force myself to completely ignore the writing files for twenty-four hours.

Send two or three chapters to a friend. I hope you have a trusted proofer—someone who knows you and your work, is widely read, and reads in your genre. He or she can be the most valuable asset during the drafting process. When you’re lost in your document, this ally might be your manuscript’s salvation. I don’t hesitate to place the call when everything else fails.

How do you create mental white space? I’d love to hear from you.