Yesterday was a day of grace.

I rafted the mighty Colorado river, throwing flies to trout still hungry from winter’s wasteland. My daughter and I caught more than forty: browns, rainbows, and, first cast out of the raft, a scarce cutbow. Fat and sassy or long and lean, they were healthy after two years of strong snowfall that yielded enough annual moisture for a steady bug feast.

We pulled bank-side for our favorite river lunch: tuna salad, Fritos, and freeform homemade blueberry pies. Sat in the sun, propped our feet against rubbery pontoons, enjoyed water whooshing past — life was good.

But the day started that way.

Approaching the put in, I said, “deer on the left.” My guide and I collided with one once, and walked away with a totaled SUV, bloody nose, and sprained finger. We are now especially vigilant about creatures crossing rural roads leading to rivers. He slowed as the doe pranced out. Then stopped as the first fawn appeared.

It was days old. As in, less than a week. It’s spindly legs worked awkwardly, thrashing in spasms, like a tiny Lipizzaner stallion executing show paces. Finally, it stumbled up the embankment to join Mama. 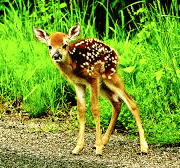 Sure enough, the second spotted baby tumbled onto the dirt. Unsure how to steer its body, it turned circles, then stopped in the middle of road. Mama and sibling were up high as Road-Baby made the squeaking noises peculiar to newborn deer. I hoped oncoming traffic wouldn’t force me to throw myself in front of the spotted wonder because that’s just something a mama would do.

Finally, after much peeping and pirouetting and three face plants, the fawn joined its family atop the little hill.

“All creatures great and small, the Lord God made them all.”

I’m writing from my parents’ house. The forecast calls for 97 degrees today, with high humidity. A stroll from car to grocery store soaks my clothing. I would do horrible things for an iced tea or a blizzard.

Coming from my cool mountaintop to a place now impossible to inhabit without air conditioning, I remind myself that Dad is eighty six, and every birthday is a gift from God. I stop grumbling and celebrate.

This is a place of tradition and memory. I remember childhood summers, when it was safe to leave windows open at night. Before green lawns, too many golf courses, and a swimming pool in the backyard of each new home. Before Mom and Dad could afford to run the air conditioner.

I would lie in bed, listening to a brown clock radio the size of a small work of fiction, and look at the stars through mimosa fronds. Cicadas were backup singers for Karen Carpenter, Carole King, and James Taylor. I would marvel at how immense the world must be (mine was limited to a southern swath of the United States), and wonder what my future held.

Songs like Marrakech Express by Crosby, Stills, and Nash transported me to faraway places. Where was Marrakech? (And I still don’t fully understand that song, but that’s true of a number of 70’s tunes.) The next summer morning, I would maybe make my weekly trip to the library to check out seven books (all they would allow), swim in my uncle’s pool across the street — the only one in the neighborhood, or go to church. Read and draw in the back yard under a gigantic elm tree.

Radio and summer and books. What a team!

I’ll return home tomorrow to do another live radio interview about writing When Camels Fly. I think of my dreams as a little girl on the poor side of town. Writing fiction was at the top of the list. Ahead of marrying or having kids. Ahead of everything else. I wanted to write stories.

To paraphrase the late Karen Carpenter, it did take some time this time.