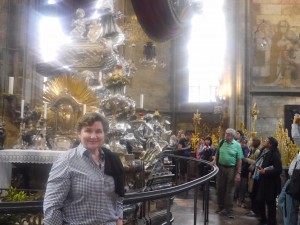 After leaving the States in mid-August, I have left microscopic bits of tread across Switzerland, Austria, the Czech Republic, and Hungary. My Apple Air is bursting with notes, history, and tidbits for the third manuscript. Photographs of beautiful and amazing things fill a memory card, and I’m loading the second as I prepare to release The Brothers’ Keepers next month.

I’ve seen enough religious art to recognize some of the faces. (Just kidding.) I’ve stood, open-mouthed, gazing up at Renaissance architecture in Florence, across at the endless North Atlantic, and down into torture chambers (eek!) in Prague.

I love them. They peal from church towers, announcing services and establishing the time — an important function before people had watches or cell phones. And their joyful songs remind me of the God I serve. 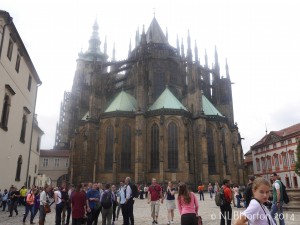 St. Vitus’s Cathedral in Prague let loose while I was standing inside, shaking the very foundation of that mighty edifice. I almost giggled. The Clock Tower in Venice, where two figures literally “hammer” a large bell to make it toll, entertained me as I stood in line for a skip-the-line tour. (Obviously, a misnomer.) And the Duomo here in Florence, only two blocks from my apartment, calls to my soul every day.

I wish we rang bells in the US. Someone would protest in the name of religious equality, and someone else would insist on broadcasting the Muslim call to prayer. (The combination reminds me of Jerusalem, a living recording studio for religious noise.)

Would the world be a better place if we had daily reminders that we’re part of something much bigger and more eternal than our daily cares and tasks? I think so.