Autumn in the High Country is beyond belief. I marvel at the colors that flamboyantly embellish every natural surface of the mountains and valley floor, and pity those folks who do not get to enjoy this season to its vibrant fullest. Living here in late September and October, surrounded by persimmon-colored serviceberry bushes and yellow and flame-tipped aspens, is a feast for the eyes.
And the soul. How can a heart not soar when looking at such beauty?
The critters are busy preparing for the cold to come. Yesterday (stop reading if you’re squeamish) we heard a mountain lion kill an elk in the creek bed at the base of our property. I hope that the whistles and squeals and grunts and growls are the last five-minute dirge I ever hear. A roughly four-hundred-pound black bear roams these parts every dusk and the chickadees (that I thought lived only in Norman Rockwell’s imagination since they didn’t exist where I grew up) gorge on every berry they find. Even the pair of fox has stepped up its pace, sweeping through quickly as they search for rodents and rabbits. 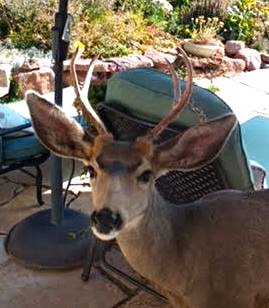 Although I’ve seen no blaze orange on the mountainside a couple of miles north of my office, the rut starts soon. This young fellow didn’t get the message that he was supposed to appear manly to seduce a sweetheart. If you look closely, you can see the velvet trailing from the antler on the right, and a daisy tangled in the top tip of the antler on the left. He’s going to make quite an impression with his boutonniere. What a dandy!

Pumpkins fill crates in front of the grocery stores, Halloween candy lines the aisles. Companies are blowing out irrigation systems and cutting lawns for the last time, removing debris so that the snow doesn’t create a moldy mess in the spring. Revving chain saws fill the air as residents stock wood piles for the winter. The valley-wide ski swap—an annual event that erases social and economic barriers—just ended with winter gear finding happy new homes. 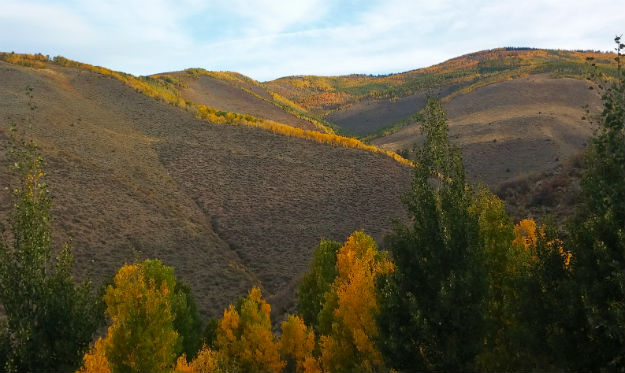 With the changing seasons, I’m making changes too. I’m drafting a new manuscript with new characters. It’s suspense, but crafted a little closer to home. The protagonist rivals Grace Madison, whom I’m not abandoning. Her adventures are far from over.

But with the changes in my life, most particularly the loss of Mom and Dad so recently, I’m pushing against boundaries a wee bit. Preparing for the directions I want to go with the wonderful decades I have left. Invigorated by the seasons to come.

I hope you’re (wisely) obliterating boundaries too. We’re not meant to be caged, you know. Spread your wings! Fly!

This has to be one of the most rapid descents into fall in the history of the known universe. I’m not too sure how I feel about that accomplishment.

Every morning, I get up and look out the bedroom windows at larger swaths of yellow and persimmon. Long-time residents say that a wet August diminishes the vibrancy of changing leaves. But either these people drank too much Kool-Aid in the 70s or the bushes and trees didn’t get the memo.

Yesterday I caught the first whiff of woodsmoke. Earlier in the week, fisted whirlwinds of leaves and petals arced across the stones of the front terrace. The meadow is full of late-summer wildflower bouquets. (Or at least that’s my self-absorbed interpretation of the clumps.)

I’m not sure who to blame, but my currants have disappeared and the rose hips are rapidly becoming an endangered species. The fruit is missing from the bottom two feet of each plant, so I’m suspecting one of the rabbits I thought was now extinct thanks to a hungry pair of fox sweeping through most evenings. 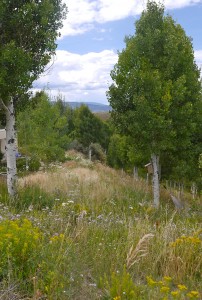 When we built several years ago, we installed a xeriscape landscape. Water is precious in the High Country, and we believe that we are called to stewardship of this earth as Christians. (The daisies and wild grasses are waist-high in the back, so I guess our stewardship is working. The sprinkler system has been off since early July.) I think we’re going to have to call in professional help to cut everything down before winter. Bailing wire, anyone?

Our nighttime temperatures have dipped into the thirties a few times, although our afternoons creep into the seventies. The red-tail hawks are riding wind currents that have shifted up the creek at the base of our property. I watch them pirouette most afternoons, and their grace and freedom inspire me to soar!