We coast through an intersection, singing Bohemian Rhapsody (all five parts) at the top of our lungs without noticing the other car, the one whose driver looked up just in time to prevent T-boning us. Or we’re in the chair at the dentist, a drill mere inches from our brain, unaware that the dentist is working hard to control a bad case of the hiccups. (You’re welcome for that one.) Sometimes we have a sense of something wrong—an unease, the proverbial hair on our necks standing on end—without fully realizing the danger from which we’ve narrowly escaped.

These moments are brushes with mortality. They remind us that we’re a speck in a much larger universe. We’re just passing through, hopefully living every moment as if it were our last. Because it might be! Consider them a divine thump on the back of the head.

I’ve been outside this summer, which invariably will end too soon. When not writing or working on the platform redesign I’ve been playing golf and fishing and working in my garden. It suffered as I travelled back and forth to do end-of-life care for my parents and settling the estate. Long summer days (usually six hours of weeding and pruning and planting) have been beautifully restorative. Worshipful. Soul-calming.

But last Thursday was a different sort of day. I was jumpy. Dogs were barking a canine version of Handel’s Messiah. Even the birds didn’t seem to chirp with vigor. The entire environment was off, on edge. In a bad mood.

We haven’t seen a bear this year, although last summer’s neighborhood patrol was a four-hundred-pound delight of drooling, stinking, bear fur. Bears normally rest during the day and are active at night, so I wasn’t terribly worried to be clambering up and down my garden berm mid-morning. (To be honest, I’m scared of cougars; you never see them coming.) But something was off that day. Even though I’m at peace with my God and unafraid of eternity, I hope that my departure from this earth doesn’t involve sharp claws and big, pointy teeth.

I finally tugged off my muddy boots, went to my office, and got my bear gun out of the cabinet. I proceeded to garden without mishap until afternoon thunderstorms forced me inside. The last thing I did was to spill DeerOff (as necessary as water in places where deer and rabbit know a gourmet meal when you plant one) on the drive before dousing everything I wanted to keep. 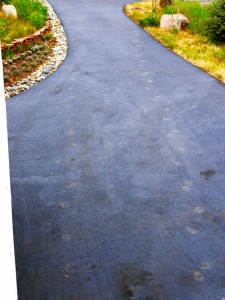 The next morning I glanced out my office window, checking for rain clouds on the horizon. I noticed that FedEx or UPS had driven through the DeerOff, leaving tracks. I would check for a parcel at the pedestrian garage door later, and went to work. Then I ran errands before settling at my desk to write a synopsis. About fifteen minutes into that task, I rocked back in my office chair. How could someone have driven through ONE puddle with both sets of wheels, leaving TWO tracks.

Intrepid suspense writer that I am, I knew that something was up. Deductive reasoning forced me out of my chair. I trotted down the stairs, out to the freshly asphalted driveway. I paced to the street, studying weird markings until I can to a clear set. I paused, and sucked in a deep breath. then I laughed. 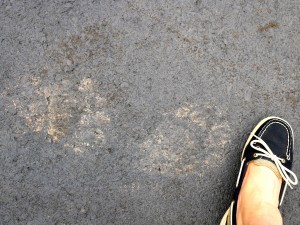 I stood, hands on hips, staring at bear prints that were twice as wide as my foot. Big Bear had walked through the DeerOff in broad daylight that morning, moseyed to the street, wandered around, and returned up the drive—creating two sets of near-parallel tracks. I remembered my uneasiness the day before. The  Glock .356 Sig was still on the office bookshelf, next to the loaded magazine.

I thought of the Holy Spirit, who guides foolish mortals. I said a prayer of thanksgiving—for this guidance, for my Glock, for the birds and dogs who nudged me into high alert. I thought of all sorts of narrow escapes; not just the physical ones, but the moral and theological ones as well. I wondered if God our father holds His breath when we face a choice between good and evil. As a parent, my blood pressure (notoriously low, thanks to genetics) hums a little higher when my children are at a crossroads.

Even though I’m an insignificant speck in this universe, I am one of God’s children. And at least last week, I was worth saving from a very large bear. Especially in summer—fly-fishing through rapids, gardening on the edge of the boonies, even (or especially) riding my bike on mountain trails—I keep the Holy Spirit busy.