I have loved the changing seasons since I was a young girl. Where I grew up, seasons were 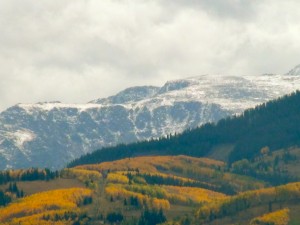 subtle. The arrival of autumn was preceded by a light, swirly wind barely noticeable on an October day after summers of the triple-digit variety.

Now I live in a place where the progression of time is profound. Crystalline summer days balance the four feet of snow outside my office window as I type. Blazing fall leaves vividly contrast with the muddy months of spring. Each of our four seasons is unmistakable.

This has been a particularly snowy winter. Yesterday, the municipal bulldozer ferried loads of snow between our short street and a dump truck, gradually moving a pile the size of an eighteen-wheeler trailer to parts unknown. But we’ve also had days in the forties lately, and the skies today are Mountain-Bluebird blue.

Most exciting, my three favorite harbingers of spring are here. Enormous flocks of spunky robins punctuate branches with splashes of fiery red breasts. The snow-shoe hare that lives under a rock bench overlooking the back meadow left a trail through the snow. I saw the hopping furball Monday morning just before dawn, and yesterday evening it darted underneath serviceberries, toward its burrow, making me smile.

The bald eagle that spent half an hour swooping and diving, hunting (probably the hare) within a hundred feet of my office windows this morning thrilled me. They mate for life, and migrate up and down our valley every spring and fall. I wonder if it’s one I see every summer on a particular bend of the river. We often anchor up to watch family life in a nest atop a long-dead, massive, tree. I’ve fly fished this river for almost twenty years, and know where to find treasures normally hidden to those in passing boats, rafts, and tubes.

Spring: a time of renewal. A two-steps-forward, one-step-back ritual as new growth battles defiant winter weather until it finally yields. Spring reminds me of my spiritual journey. One of rebirth and unavoidable failures, thankfully punctuated by glimpses of the Divine.