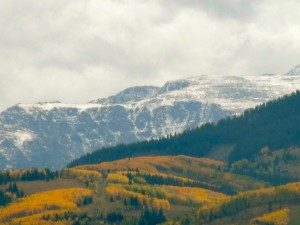 Every summer for eleven years, I’d pile kids, luggage, and whatever work needed to go, as well as a two-foot pile of novels (my “summer reading”) into the old, bought-used SUV, and drive a thousand miles to our mountain ranch.

That sounds glamorous until you think of barbed wire fences obliterated by migrating elk, visiting rodents (no more about that, I promise), illiterate fishermen unable to read the NO TRESPASSING signs, neighbors living in teepees with their dogs (invariably named “Spike”) for warmth, and the fourteen-hour question: “Are we there yet?”

Aside from these hiccups, it was two-and-a-half months of bliss. But today is my day.

Are we there yet?

I vote, but don’t discuss politics. I do research, from conservative and liberal sources (some of which you wouldn’t believe). I fundamentally assert everyone has the right, and responsibility, to be informed. Those signposts of adulthood become tangible when a person votes.

But can someone please explain to me why sharing political opinions became public sport in otherwise polite company? You know who you’re going to vote for. I know who I’m going to vote for. Undecided voters haven’t finished their research (and may not do any), but they’re not going to be swayed by you or me extolling our candidate’s virtues. (Do candidates have virtues? Or has “spin” replaced character?)

But people post endless snarky comments on Facebook. Share repeated sarcastic opinions on Twitter. Both friends and business associates read these observations. If it never occurred to us this behavior is bad manners, we should at least know it’s TERRIBLE business.

Are we there yet? I’ll shut up if you will. I’ll be courteous about sharing opinions. And I’ll vote. This vicious battle we Americans fight every four years can’t be won in one election. We’re on this road for the long haul, and we’d better get along.

So please let me know when we get there, because I’m tired of watching the road, and listening to the kids.

I watched with wary amusement the reactions to the Coptic papyrus in which Jesus refers to “his wife,” then later refers to Mary.

Seriously? I miss the point.

First, it’s a Coptic text. Do a little research on the Copts (“Egyptians,” who claim John Mark as their founder). In 451 AD, they veered from mainstream Christianity (at the Council of Chalcedon) in their interpretation of Christ’s nature, declaring him separately human and separately divine, while the rest of us grasped homeostasis, where his natures are fully blended. So we’re dealing with a document whose very source is deemed inconsistent with the fundamental beliefs of Christendom for the past almost two-thousand years. I greet Coptic teachings with skepticism.

I ponder the Biblical and para-Biblical literature out there—vast quantities of both—that never mention Christ’s wife. Don’t you think we’d have found an inkling of this rather dramatic revelation, even granted the completely patristic nature of Biblical translation and transcription?

I see the text’s coverage as just another rabbit trail. Why grasp for something so easily relegated to heresy when we never mention Junia, a female apostle of Christ (Romans 16:7). Ever heard a sermon about her, or even heard her mentioned anywhere except here? For one thing, many scholars believe that in some texts her name was mistakenly changed to the male form, Junius. Ask yourself, and your pastor, why we haven’t heard of her.

What about Joanna? Do some research in Luke, where she is referred to in the band of disciples traveling with Christ. Was it only last month you heard a sermon in which she was mentioned? To use a seminary phrase, “that’ll preach.” What about Thecla, Philip’s daughters, Ammia, Philumene…the dynamic list goes on. It continues through the first few centuries, barrels through the Renaissance and Reformation, and gets lost in today’s complacency.

Christian females have a rich heritage of leadership, service, and scholastic integrity. For our daughters’ sakes, we need to begin to unearth the unbreakable chain that embeds us in the foundation of our faith.

I’m hiding today, looking from my glass cube at Crayola colors on mountains to the northwest. Fall is my favorite, and I imagine God joyfully scribbling vibrant swaths of yellow (aspen), orangey persimmon (aspen and serviceberry), and red (more aspen) in amoeba-shaped swirls on our mountain sides. 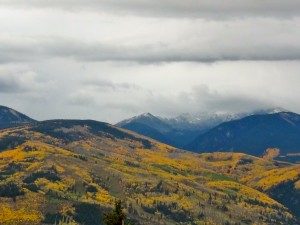 If my view is this good, His must be spectacular!

Yesterday morning, I looked south and found—”snizzle!” The season’s first drizzly scree dusted the range with a snowy cap in craggy crevices, and I reminded myself how rapidly this will change to solid white peaks resembling stiffly whipped cream.

As I fished the Colorado river last week, cottonwoods were tall stalks of corn yellow, although bank foliage clung to summer green. The wild geranium leaves were streaked with red veins, as were the berry brambles. Geese flocked and squabbled, preparing for the flight south. Beaver feed stations piled everywhere, dams recently reinforced. The long, frosty spell is pushing in. (And so are the bears, gorging for hibernation.)

I’ll leave this vibrant valley to attend a weekend conference, a pivotal step in my awesome eighteen-month endeavor. God has opened countless doors (and a few windows). People have been so kind—and interested! I’m turning a professional corner much like the seasonal change, generally knowing what lies ahead, well-prepared, with contingencies in place. What an adventure!

When I return, piles of leaves will litter the ground. The garden will have to be clipped. Nights will be below freezing for the long haul. The two doe and three fawn in the back this morning will be a little fatter, thanks to our wildflowers and grasses. I’ll coerce Mr. Wonderful into putting the big, crazy metal pumpkins in the front yard, and in return, I’ll fetch the slow cooker for stews.

I see His hand in all of these wonderful, invigorating changes, and hope you do, too.

Life’s surprises are opportunities to practice a teachable spirit.

That’s what I tell my hermit self as I emerge cautiously from under sandstone to embrace a third career as novelist and blogger. The goods news is I have an answer to the eternal question, “What are YOU going to do with your seminary degree?” The bad news is sharing involves risk. Or, in this case, at least visibility. Only God knows…

Welcome to The Cuneiform, an extension of myself and my protagonist, Archaeologist Dr. Grace Madison.

The blog is not a self-obsessed venture born of boredom and bravado, but part of a larger platform based on faith and fiction. Grace and I have neither soul patch nor tattoo, adornments we associate with successful bloggers. We are only “hip and trendy” as the phrase relates to curvaceous body parts, and clothes from the seventies, respectively.

If you can relate, please join us as we ride camels across publishing’s desert. Explore the evolution of love when child-rearing ends, and rediscovery begins. And enjoy the amazing adventure of Christian life shared in weekly blogs. 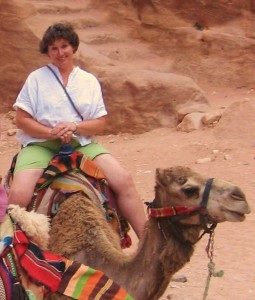 We hope we’ll be good company on your vicarious vacation through Israel and Jordan, Western Europe, Peru and Chile, and Greece and Turkey (so far). God leads us on quite the journey, and we’re finally ready to share.

So prop up your dusty hiking boots, shake the desert sand from your safari vest, and brew a cup of hot tea — mint, of course! — to prepare for the stories ahead.

We warmly welcome you.