(Disclaimer: I thought this was the fish that would best me.)

What is it about a marlin? Hemingway fixated in The Old Man and the Sea. Anglers regard the species as part of a Holy Grail that includes the chinook; a tarpon; any sea-run brown off the Tierra del Fuego; and a tail-walking steelhead (“the fish of a thousand casts)” caught spey casting while wading the Deschutes.
Striped, black, white, or blue, a marlin is angling braggin’ rights. In my dreams.
In six months, I’ve lost one parent and settled the second in assisted living a thousand miles away. I’ve sold a house, executed an estate, distributed belongings, and seldom been home more than two weeks in a row.
This trip, scheduled a year ago, was supposed to be a break from a frigid winter on my mountaintop. Instead, it was a communications marathon with doctors, nurses, assisted-living employees, lawyers, and adult children. 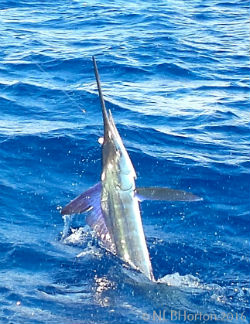 When we boarded the boat for deep-sea fishing, I wasn’t at my best. Saltwater fish get large (duh). I haven’t been working out because I’m either doing eldercare or recuperating from eldercare. And although I’ve landed a sixty-pound salmon in a river and several thirty-plus pound salmon in the international shipping lanes between the Kenai and Queen Charlotte Islands, I have great respect for ocean currents. I also have issues with . . . seasickness.

It was shoulder season for large species, so I encouraged Mr. Wonderful to take the first strike. He brought a vibrant green dorado, which matched my face, to the boat. I watched from the upper deck, content to escape diesel fumes, as he wrestled his catch.

The captain sent me to the chair. Moments later, it hit. Hard. The line buzzed as the fish headed for Ireland. Three rods were brought in while the fourth was jammed into the holder. I gripped, braced my feet against the cooler, and reeled for all I was worth. Which wasn’t much. 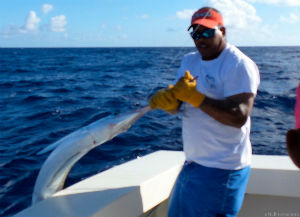 The captain yelled, “Marlin!” and I glanced as it leapt. I was in trouble.

This white marlin didn’t like me. I wasn’t fond of it. I hoped I didn’t throw up all over the rig and thought I might have to try to hand the rod to my husband: ANATHEMA! The fish cleared the water in an arc, and I reeled while wondering if this was going to end well. My triceps and biceps reminded me of the dusty free weights on the office floor, but I kept steady pressure on the lunatic acrobat with fins. Stupid fish.

I kept reeling. The marlin jumped, ran, and misbehaved. The captain adjusted the position of the boat. My husband muttered about lucky anglers and asked for something that would cut the thick monofilament line uniting me with my fish.

For twenty minutes, I forced myself to focus only on the fish and forget the rest of my world. After one last leap near the boat, we tugged the marlin over the side, snapped photographs, estimated nearly seven feet (including bill) and sixty pounds, and threw it back into the Atlantic.

I stumbled up the stairs, then chummed the boat from stem to stern, fore and aft, side to side, and over the river and through the woods. Although not as epic as Hemingway’s Santiago, the marlin escaped to be caught another day as a fitting end to the battle between this old woman and the sea.

“My big fish must be somewhere.”

Ernest Hemingway, The Old Man and the Sea