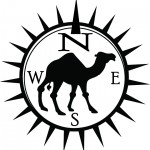 Several hundred book sales, and more than a hundred reviews averaging 4.6 out of five stars later, I owe a huge “thank you” to every person who has read When Camels Fly. This first novel in the Parched series will be followed in November by the second, The Brothers’ Keepers. (In the meantime, new cover art is being developed based on reader input about their love for the characters in these stories.)

These stories are an act of love and faith: I love every single moment and have faith that you do, too! To continue this literary adventure, I’m embarking on a long journey, gathering visuals I missed while researching The Brothers’ Keepers two years ago. And I’m finishing research for the third, as-of-yet untitled book, which will be released late in 2015.

This blog post, Chasing Grace, is the first in the fall series. I’ll literally be chasing Grace—as in archaeologist Grace Madison, my protagonist. The fierce wife, mother, and woman of faith rescued her daughter, then is pursued or rescued by almost everyone else in Israel and Jordan in When Camels Fly. In The Brothers’ Keepers, her dangerous journey weaves through Italy, Germany, and Switzerland, with a swing through her beloved Middle East. We’ll see if you can figure out where Grace’s commitments next take her based on these blogs.

Each week’s post will be from a new location, with photos and references to The Brothers’ Keepers. It will be great having you along for the journey.