I feel at home in some strange places: one neighborhood in Paris; any drift boat casting a fly on any river anywhere; Cusco, Peru; and the Old City of Jerusalem, for instance. The weather doesn’t matter and life’s activities don’t matter. I am happy to be in these spots every time. 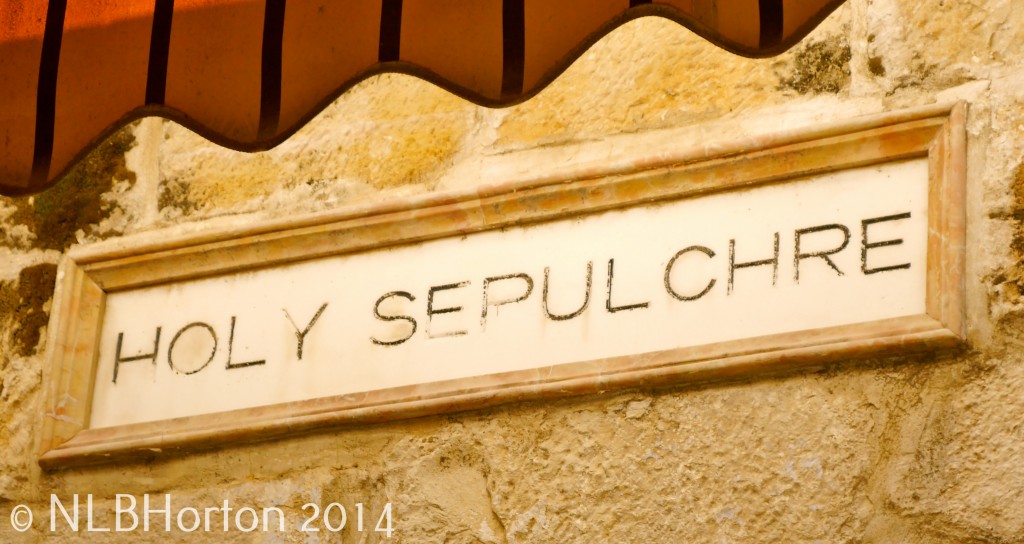 I entered the courtyard of the Church of the Holy Sepulcher in Jerusalem around noon one day the week before last. The bells rang so loudly that I stuck my fingers in my ears (and looked very holy) in a place said to be the location of Golgotha, the hill where Christ was crucified. In all fairness, some scholars say this is the wrong spot, that a crucifixion would have occurred outside the — then — city walls. But I’ll leave that discussion to the theologians.

A few Greek Orthodox monks clustered beneath and to the right of the fabled ladder. (You can 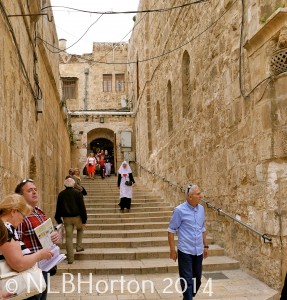 findmore information about that ladder in the wild-and-crazy conclusion to When Camels Fly, releasing May 12th.) A sister in full black-and-white habit strode firmly down the stone staircase leading to the courtyard from the Christian Quarter, to my left. An orange and white tabby cat lolled on the top step, confident that no pilgrim would dare step on the Sepulcher Cat.

For such an important spot, the courtyard is small — less than 150 square feet. Like all of the Old City, it’s an architectural hodgepodge, cobbled together at different times for a variety of worshipful purposes by people from many places. Because of the tangle of passageways and alleys that comprise the Old City, a pedestrian stumbles on the Sepulcher, sitting rather in the middle of the UNESCO World Heritage Site. Even if it’s my destination, I’m always surprised to pop through the arch to it’s right, or descend the stone steps to it’s left, and find myself staring at the basilica facade.

And it stuns me. I don’t venerate the place, or worship the spot. I’m not one of the pilgrims kneeling to kiss the Stone of Anointing, where “they” say Christ’s body lay as he was prepared for burial. But I’m aware that I’m standing in a very special place. (All of the Old City of Jerusalem deserves that title, in my opinion.)

It’s a site identified almost two thousand years ago by Helena, mother of the Emperor Constantine. A building that’s welcomed pilgrims for almost a thousand years. Surrounded by a swirl of humanity — Christians, Jews, and Muslims — going about their daily business, working in tight quarters, living life.

It’s a remarkable spot, and of those places I feel at home. Every time.

Do you have places like this? Where are they, and why are they special to you? I’d love to know.