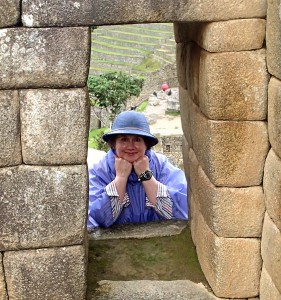 As a generally risk-averse person, I am aware that my life is beginning to look alarmingly exciting, and a little…dangerous. And I live, therefore I write about it.

A year ago, I met with an Incan shaman as I prepared to float the Amazon (I caught a piranha) and explore Machu Picchu (awe-inspiring). The daytime skiff that carried us along tributaries was populated by a half-dozen explorers, one tarantula, one caiman, and two guides. I hid behind my blue hat when we discovered poison dart frogs and the anaconda.

Today, I’m finalizing my return to Israel in March.

On my last visit, heavy artillery fire in Syria, machine gun fire in Lebanon, and 118 degrees at the 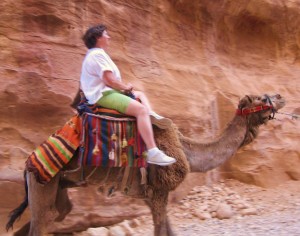 Sea of Galilee created my perfect storm. I gazed into Egypt near Eilat, stunned by the vast expanse of sand, aware the scene had changed little since the pharaohs’ time. We crisscrossed the West Bank—that lozenge of territory ceded to the Palestinian Authority in the Oslo Agreement of the 1990s—and learned to identify three types of machine guns. Five years ago, that West Bank crossing was tense, and I doubt it’s improved. (I’ll let you know.)

And Jerusalem. We had just checked in when Maghrib (the Islamic call to prayer at dusk) began. Broadcast from minarets five times a day, the chants became a soundtrack for exploration of Israel and Jordan; Christianity, Judaism, and Islam; the past and present. (I have no idea about the future in this part of the world.)

These experiences, and an even grander one in the fall, create a global perspective for which I’m thankful. Stay tuned—2014 is going to be incredible.