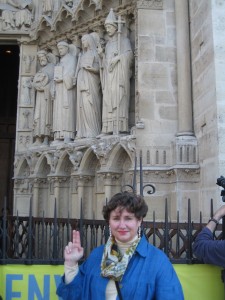 But did you hear a sermon on the first person to recognize the risen Christ? It wasn’t the local priest or pharisee. Not the youth minister sporting a well-trimmed soul patch. Nor the local magistrate rescinding the death certificate, or paparazzi wanting to make a quick mosaic. According to Luke (my favorite), Mark, and Matthew, Christ appeared to Mary Magdalene — a woman and prostitute, no less — and her friends. John wrote she didn’t recognize Christ (while confirming she was first), and Paul (an easy target for misogyny) told in Corinthians He appeared to Cephas, then Peter.

And here’s a shocker: the women were on their way to the tomb to render service. You know, like the jobs (nursery work and bake sales) they do to keep today’s church running smoothly. Mary Magdalene came to the tomb to anoint Christ’s body with spices, delaying its putrification.

Women were second-class citizens in those times, unable even to testify in court. And yet Christ, whose every move, breath, and thought was significant, chose to appear to them — to us, to you, to me — because His messages are unlimited by gender, race, and creed.

As I’ve written before, Christian women are part of an unbreakable chain anchored to the very foundation of our faith. Our links include Eve (BTW, Adam was standing next to her, mute, in the garden — check the verses in Hebrew); Miriam (Moses’ sister, the prophet); Deborah (Old Testament judge, warrior, and advisor to kings); Dorcas (church-builder); Junia (disciple whose feminine name scholars now believe was changed to the masculine, Junius); and the disciple Phillip’s four daughters (prophets all).

Claim your heritage! Educate your daughters. Hold your pastor accountable for preaching inclusively when supported by Biblical data. And live vigorously and joyfully as representatives of Christ, daughters of God.